Moto Z4 is heading towards the official launch.  The device has supposedly appeared in a new leaked render, ahead of its official debut.  The existence of a 3.5 mm audio jack is also revealed in the leak, that shows the device from all sides.  Further, the support for waterdrop style notch and the Moto Mods are also confirmed.  Although the Moto Z3 is now over eight months old, there is no confirmation on the launch date for this device.

The Black cololur variant of Moto Z4 is shared by Evan Blass prolific tipster on the Twitter.   The leak, that gives the look of the device from all sides confirms that company has kept the basic design of Moto Z3 even for Moto Z4, other than a waterdrop-style notch and the wafer-thin bezels.  In addition, the Moto Mods support is also present.

The renderPhoto Credit also reveals the Moto Z4 with a camera bump.

As per earlier leaks a 6.4 inch full HD OLED display alongwith in-display fingerprint sensor are featured on Moto Z4.  As per reports the device is being powered by Snapdragon 675 SoC with support for Motorola’s 5G mods.  Further, the device is believed to have on board storage of 4GB/ 6GB of RAM and 64GB/ 128GB.  However, it is not clear if there is going to be an additional microSD card slot for further expansion.

The imaging front for the device comes packed with a single 48 megapixel sensor at the back which would use the Quad Pixel technology in order to deliver an image of 12 megapixel.  Also, the device is rumored to have on the front a 25-megapixel selfie camera. 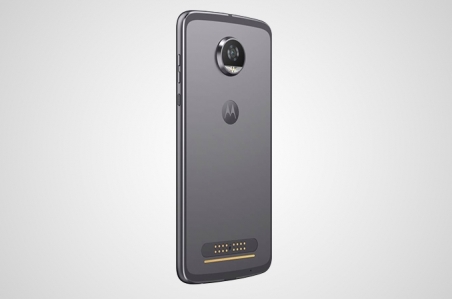 The other specifications include Android 9 Pie out of the box as also the preloaded features such as Google Lens and Google’s Digital Wellbeing.  Over and above, the device may have Moto Actions, Motorola’s proprietary Moto Display and Moto Experience.