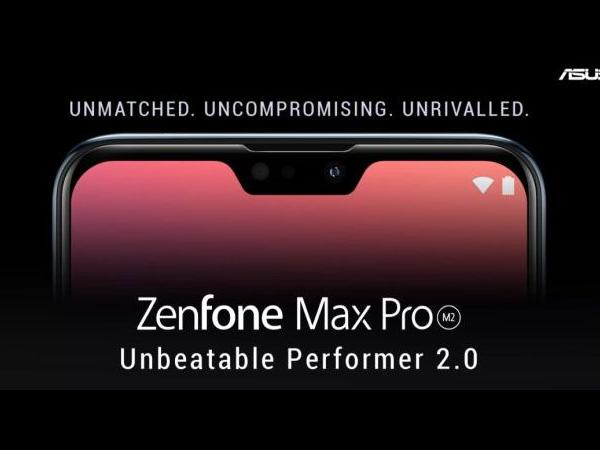 The Asus ZenFone Max Pro M2 landing page on Flipkart reiterates that the smartphone will use Corning Gorilla Glass 6, but adds that it will offer “unmatched performance” thanks to the use of the “fastest Qualcomm Snapdragon [SoC] in the segment.” Unfortunately, exactly which processor this would be was not revealed by the company. Previous leaks tip that the smartphone will have two variants – the ZB631KL and the ZB634KL. The former will be accompanied by a triple camera setup. Also it shall be powered by a Snapdragon 660 SoC, though more recent leaks point to a dual camera setup. If this is priced below Rs. 13,999, it would upstage the Realme 2 Pro. The latter also sports the same processor at that price.

The Flipkart landing page for Asus ZenFone Max Pro M2  claims that the smartphone has a “best-in-class Sony sensor”. It will deliver impressive bokeh and low-light photography. Finally, the teaser added that the ZenFone Max Pro M2 will have a “largest capacity battery in the lightest form factor with 2+ days battery life”. We can take this to mean that the smartphone will have battery capacity at 4,000mAh or higher.

December 11th is also the date of the Indonesia launch of the smartphone. As mentioned, specifications leaked till date include a Snapdragon 660 SoC, 4GB and 6GB RAM variants (with an 8GB RAM variant also tipped). Additionally, 12-megapixel and 5-megapixel dual rear camera setup, and a 6-inch display. Another leak had tipped a 6.26-inch display.

The Asus ZenFone Max M2 has also been in the pipeline alongside the ZenFone Max Pro M2.  It is said to feature similar specifications with the exception of a Snapdragon 636 SoC.
Tags: Asus, M2, Max, Notifications, prices, Pro, Reviews, Zenfone