The Kindle Paperwhite has been the best Kindle for most of the readers since 2015. In 2015,  Amazon last updated it with a screen at par with the high-end ‘Voyage’ and ‘ Oasis’ models at just a fraction of the price. Today, Amazon has updated the Paperwhite again by adding new features that were introduced with the second-generation Oasis, including waterproofing and support for Audible audiobooks in a lighter and much thinner package.

Almost every aspect of the new Paperwhite is better than before.  The screen is now flush with the front in a seamless sheet of glass — just like the now-defunct Voyage offered — there are more LEDs for the illuminated display. The storage has been doubled on the base model to 8GB, with another model offering 32GB of storage. There’s support for Audible audiobooks over a connected pair of Bluetooth headphones or speakers, just like the Oasis.

Now we talk about the feature that is maximum in demand. It is Waterproofing. Theuser can afford to drench the  new Paperwhite in upto six feet water for up to an hour . It has an  IPX8 waterproofing. Consequently, it becomes more than safe for reading in a tub, by a pool, or by the beach. Although, despite all these additions, the new Paperwhite is 23 grams lighter than the old model. Not to forget, its almost a full millimeter thinner at 8.18mm.

As far as the screen is concerned, there aren’t many changes there: it’s still a 6-inch, 300ppi display — but considering the Paperwhite’s display was already excellent, it’s hard to complain too much.
BASICALLY A CHEAPER WATERPROOF KINDLE VOYAGE

There are a still few blocks: its bereft of physical page-turn buttons or even the under-glass capacitive touchpads such as Voyage used to have; the illuminated display doesn’t offer an adaptive light sensor, unlike the Oasis. Unfortunately, It doesn’t charge via USB-C. 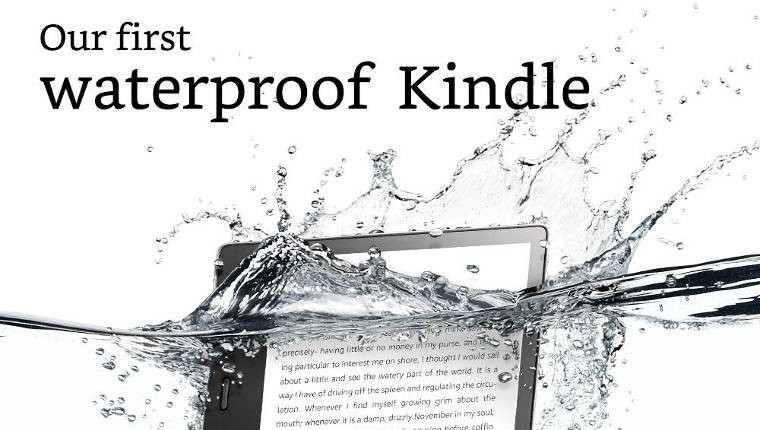 All versions of the new Paperwhite are available for preorder right from today. The 8GB model is ready for shipping.  next month on November 7th. However, the 32GB version will be out sometime in “the coming months”

Notably, the new Paperwhite is waterproof and not water resistant.